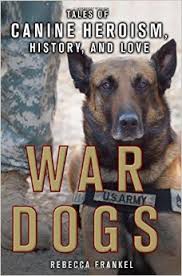 I enjoyed reading this one so much that I was genuinely disappointed when I unexpectedly reached the end of it on my Kindle. Frankel explores the world of military war dogs (MWDs) and their handlers in what is definitely the least depressing book about war that I’ve read. Despite the chilling anecdotes of explosive-detection missions in Iraq and Afghanistan, my lasting impression of War Dogs is one of admiration and moments of unexpected joy. The book captures the way that an emotional and professional relationship between MWDs and his fellow soldiers combines with an unparalleled physical ability to make these dogs such a powerful force. The only thing that could have made this book better for a nerd like me is more details on the physiology of a dog’s nose and the failed attempts by humans to replicate its expertise with technology.

“Mariana could see the force of the bullet as it hit Bronco…He was covered in blood but sitting all the same, waiting for his handler as if it had been the plan to rally at this safe spot all along… Bronco slumped to the ground, sprawled over on his side. Mariana’s heart stopped. He stared hard into the dog’s eyes, and then a terrible kind of relief washed over Mariana as he realized Bronco hadn’t just bled out in front of him. Instead, he had rolled over to offer his belly up for a scratch. Mariana exhaled, marveling at the strength of his dog.”

The Book of Rosy is the story of Rosayra Pavlo Cruz, a mother of four from Guatemala who fled to the U.S. seeking asylum, co-written by Julie Schwietert Collazo the co-founder of Immigrant Families Together. Rosy's story and her fight for a dignified existence brings to life an immigration policy that was ignored for too long and continues to keep innocent refugee children separated from their parents.
After the sudden death of her husband, Antonia would like nothing more than to recede into her solitary cocoon of grief. However, when the universe conspires to place her in the midst of telenovela-esque, high-stakes drama, she discovers that even after death, her loved ones come back to her in unexpected ways. Between the undocumented young pregnant woman who desperately need her help, and her sister who has disappeared during a manic episode, Antonia struggles with questions she feels ill-equipped to deal with on her own. She reluctantly teams up with her neighbors and her three other sisters to simultaneously quell these crises, but she is never quite sure how to prioritize one person's suffering over another's, including her own.
So happy to write this review for Latino Book Review-- Maria Hinojosa is one of my feminist heroes and such an inspiration to the Latinx community 💜 I could not put this book down! Full review at Latinobookreview.com
Spirit Run: A 6,000-Mile Marathon across North America's Stolen Land *Full version published in Latino Book Review Magazine at Latinobookreview.com*
Full version published in Latin Book Review magazine at Latinobookreview.com
*Full version published in Latino Book Review magazine at latinobookreview.com*
Loading Comments...
%d bloggers like this: