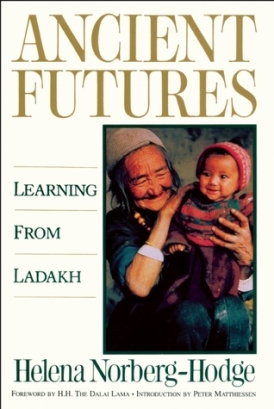 While working in international development, I found myself questioning whether foreign aid does more harm than good. I could list out ways that it failed to provide lasting solutions and effected unintended negative consequences, but I could never quite respond to the “then what do we do instead?” question that I often got from people. Rather than continuing on the path of misguided development efforts (creating energy and resource-intensive systems that emphasize economic growth at any cost), do we instead turn a blind eye to the problems largely created by Western imperialism? In Ancient Futures, Norberg-Hodge talks about the destructive forces of development and provides an alternative vision for what she calls “counterdevelopment”.

The author first came to Ladakh in 1975, back when there was barely any Western influence in this ancient society. She became fluent in the local language, immersed herself in the community over many years, and witnessed the dramatic changes that occurred as globalization infiltrated the Tibetan plateau. Norberg-Hodge sheds light on some of the many admirable qualities embodied in the Ladakhi communities—self-reliance, social harmony, and ecological balance, all of which seemed to be rooted in the limitations of their environment and a spiritual awareness of the “profound interconnectedness of all phenomena”. As tourism, industrial agriculture, and other commercial forces have created a dependence on the global economy, the Ladakhis’ connection to place and community have been impaired, repeating a pattern of social and ecological collapse that is occurring all around the world at an increasing rate.

Instead of exporting a model of an unsustainable lifestyle, counterdevelopment focuses on resisting the consumerist monoculture by re-localizing economies and actively encouraging ecological and cultural diversity.

“Once, I tried to explain the concept of stress to some villagers. ‘You mean you get angry because you have to work?’ was the response. Every day I saw people from two cultures, a world apart, looking at each other and seeing superficial, one-dimensional images. Tourists see people carrying loads on their backs and walking long distances over high mountain passes and say, ‘How terrible; what a life of drudgery.’ They forget that they have traveled thousands of miles and spent thousands of dollars for the pleasure of walking through the same mountain with heavy backpacks. They also forget how much their bodies suffer from lack of use at home. During working hours they get no exercise, so they spend their free time trying to make up for it. Some will even drive to a health club—across a polluted city in rush hours—to sit in a basement, pedaling a bicycle that does not go anywhere. And they actually pay for the privilege.” 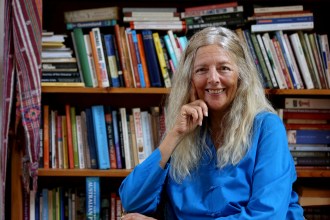