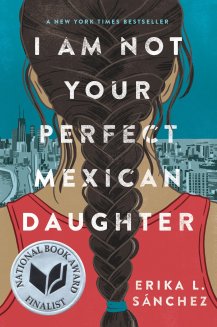 Of all of the coming of age stories I’ve read, this one is the first that made my heart swell with pride as I recognized bits myself in a young Mexican-American woman forging her identity in the uncharted territory of early adulthood.

Julia is an emotional and short-tempered teenager who struggles to relate to both her parents and peers. She’s a bookworm and grammar snob who fantasizes about her future library. She stumbles over her Spanish when she’s nervous and falls for a white boy whose privileged community feels like a different planet to her. After the sudden death of her older sister, Julia begins to learn more about the life her sister led behind closed doors and questions whether the truth is more valuable than the tenuous threads barely keeping her family together.

The novel features a young adult not only battling the timeless issues of teenage heartbreak and social anxiety, but also those struggles specific to the immigrant family identity. The protagonist’s voice is abrasive and witty, insecure and overconfident at the same time. I would highly recommend this book to anyone—readers of all ages will undoubtedly relate to Julia and her family in unexpected ways.

“But where are you from from?”

“No, what I mean is…Forget it. ” Connor looks embarrassed.

“You mean you want to know my ethnicity. What kind of brown I am.”